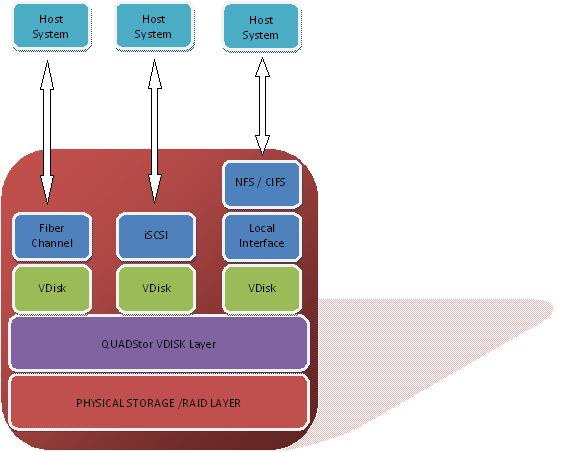 Connect the QLogic cards/controllers to a Fiber channel switch or in a Loop configuration. VDisks will be available as regular disks in the initiator systems

Infiniband coniguration is similar to the FC configuration. Once connected to the switch the VDisk will be available to the host system. An SRP initiator is needed on the host system.

VDisks can be directly accessed from /dev/quadstor/<VDISK Name>

Follow the iSCSI initiator configuration for the client operating system to access the VDisks. VDisks will have an IQN starting with “iqn.2006-06.com.quadstor.vdisk.” followed by the name of the VDisk

iSCSI Chap authentication can be used to control which initiator devices can see and access the VDisks over iSCSI. In the following section the Incoming User and Incoming Password will be the CHAP user name and password to be sent by the initiator and validated by the target and Outgoing User and Outgoing Password will be the user name and password to sent by the target to initiator and to be validated by the initiator

An initiator would then have to specify the above user name an password in order to get a list of targets.

Similar to iSCSI Discovery, IncomingUser and IncomingPassword and OutgoingUser and OutgoingPassword can be specified controlling the initiators that can login to the iSCSI target and also to authenticate the target during login.

From "Virtual Disks" -> "View/Manage" page in the HTML GUI, click on "View" under the "iSCSI" column for VDisk.

To reset the a User Name and Password, clear the corresponding User Name text field and click submit

Access control based on Initiator IQN Name or IP Addresses

/quadstor/etc/iet/initiators.allow can be used to specify which initiator can connect to a target based on its IQN name or its IP Address

The examples in these two files are self explanatory. A line starting with a '#' is considered to be a comment.