Synchronous mirroring is a feature where in data is mirrored between two storage systems (nodes) over a network. The network connectivity between the two systems is usually a private network to minimize interference with other data traffic.

However in the event of a node failure, clients can still continue as the data on the other node is a mirror image of the failed node.

Open systems such as Linux, FreeBSD have many implementations for synchronous mirroring. For example DRBD for Linux, HAST for FreeBSD etc.

However all implementations have to address (have addressed to some extent), the biggest issue with Synchronous Mirroring, namely Write Latency.Write latency is unavoidable as a write operation has to be acknowledged by both the nodes as completed.

When we wanted to implement synchronous mirroring in our product the first and most obvious idea is to use DRBD for our Linux implementation and HAST for our FreeBSD implementation.

The first issue which we would face is specifying a VDisk as a DRBD device. Usually in a DRBD configuration, mirroring is between two DRBD devices. Each DRBD device will correspond to an underlying physical/logical disk (LVM, RAID LUN etc). Rather than writing to the physical disk, writes are sent to the DRBD device. It is now the job of the DRBD device to synchronize the writes to its corresponding device and to the peer DRBD device on the other node

In QUADStor implementation this can be achieved by specifying a VDisk as the underlying physical disk for a DRBD device as illustrated in the figure below. 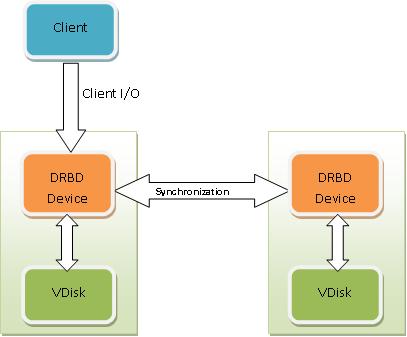 However this will only work if the DRBD device is accessed by locally by the system.

In the above scenario the DRBD Device will synchronize data to it DRBD peer on the second node which also has VDisk as its underlying physical disk.

However writes received by the VDisk iSCSI and FC interface are not routed through the DRBD device. In fact they are not even seen by the /dev/sd[x] or /dev/quadstor/<VDisk Name>

One possibility is to run another iSCSI target/FC implementation on top of the DRBD device. So the write operation would now be

However such an implementation has other issues. For example VAAI related commands such as XCOPY will be lost between the FC/iSCSI interface and the DRBD Device. The same applies to other SCSI commands such as SPC-3 Persistent Reservation commands.

The biggest factor in not choosing an external mirroring implementation is data deduplication (data dedupe). For example consider the same write operation

With optimizations as mentioned above QUADStor implementation is able to lower the network bandwidth requirements between the node, deduplication helps reduce the number of disk I/O operations on both the nodes and reduce the write latency for write operations

With synchronous mirroring at any point both VDisks contain the same data. Data received by a VDisk is synced to its mirror peer and only when both the VDisks complete the write operation, the status for the write operation is sent back to the client

When one of the nodes goes down, the other VDisk can still service client write/read requests.

SCSI Persistent Reservation commands are used by most cluster aware applications for resource locking. In the case of persistent reservations, registration and reservation commands received by a peer are executed by both VDisks and the response sent back to the client by the VDisk which originally received the command.. From a client perspective since it sees the two VDisks as multiple paths to the same disk, it needs to register its reservation keys on both the paths(VDisks)

When a node fails or goes offline, its VDisks are longer accessible by a client. At this point however, the peer VDisks can still handle client IO requests. When the node is back online, the data in its VDisks are now out of the sync with their respective peer mirror VDisks. The data from the active VDisks are synced back to the now online peer VDisks. It should be noted that resynchronization might take a long time depending on the amount of data that needs to be resynced. Only changed data blocks are however resynced. Also both peer VDisks are still accessible during the resynchronization operation.

The following figures illustrate a client accessing VDisks simultaneously from both nodes, a node failure during which the client continues writing to VDisks in the active node and the process of resynchronization when the failed node is back online 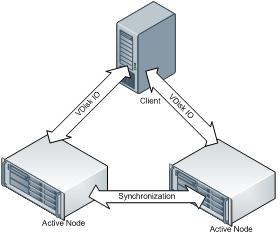 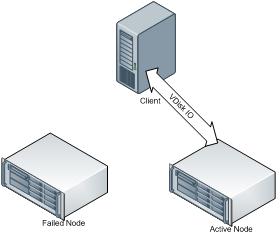 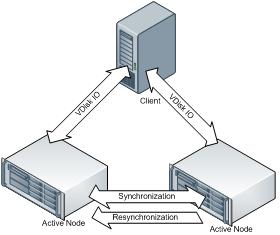 Node fencing is required to avoid split-brain scenarios. This is achieved by stonith (SLES, FreeBSD, Debian) and fence-agent (RHEL) packages. Mirroring configuration allows for specifying a fence command which is called when a VDisk needs to fence its peer.